They Are Coming For Your Kids: Experimental COVID Swab Tests Distributed to Sacred Hearts Academy Students

Sacred Hearts Academy today sent their students home with this non-FDA approved test. As a parent, I was not properly notified nor was my daughter informed this is part of a clinical trial. Her teacher just gleefully handed them out. Are we ok having our children serve as unwitting test subjects? 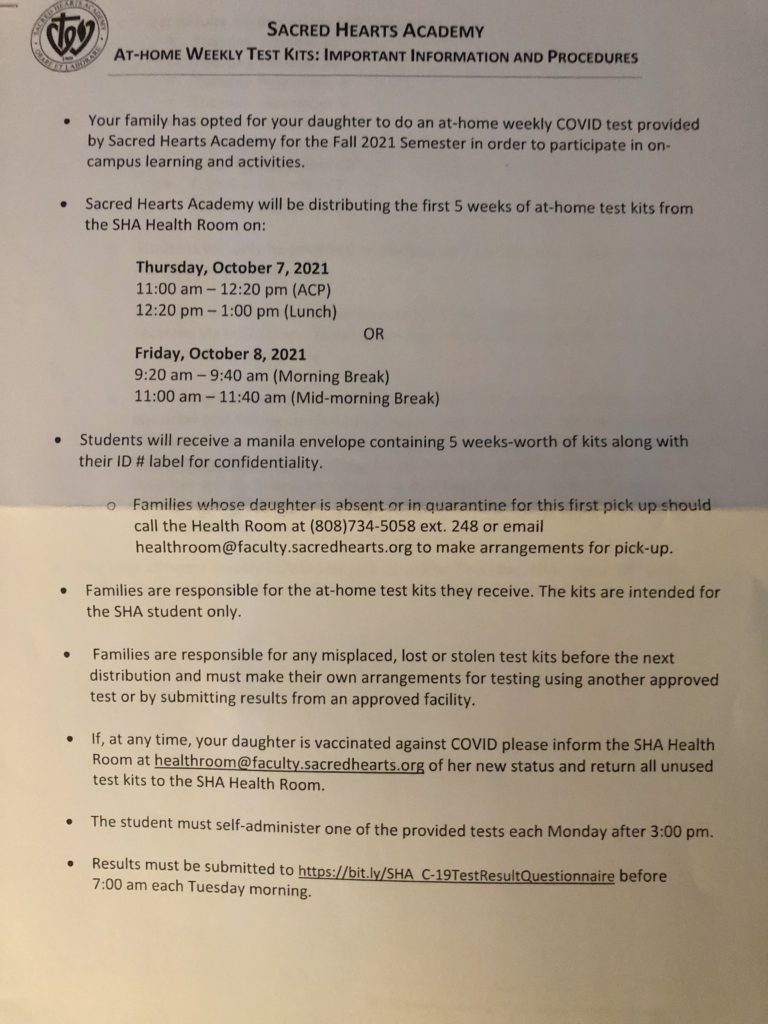 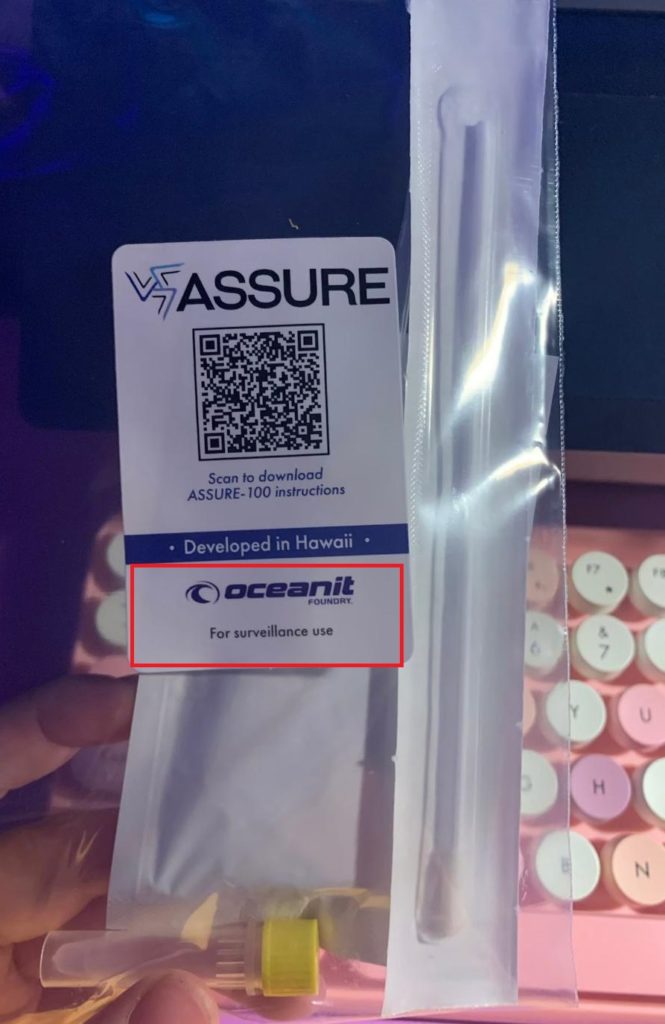 Oceanit, a Honolulu-based biotech company that had hoped to create hundreds of jobs by making rapid COVID-19 tests in Hawaii, has turned to South Korea to produce the kits after it couldn’t garner the up-front financial support it needed in the Aloha State.

Patrick Sullivan, Oceanit’s founder and chief executive, said he had hoped the state would pre-purchase some tests to jump-start the finances required to create manufacturing infrastructure on Oahu. But the company could not get sufficient funds or secure a location with sufficient temperature-control capabilities.

So Oceanit decided to work with a manufacturing company in South Korea that had enough space and staffing to produce the tests en masse with temperature and quality controls required by the U.S. Food and Drug Administration, Sullivan said.

Sullivan declined to share the name of the South Korean company [bold mine], but both tests are being produced there, he said, and then sent back to the U.S. for clinical trials.

“We were hoping to scale up in Hawaii and thought we would create jobs,” Sullivan said. “The challenge with that is when you go to scale you need elbow room.”

Jay Andrews, Oceanit’s marketing director, said part of the difficulty in expanding production locally was that investors were not ready to provide funding until the tests received FDA emergency approvals.

“That would have honestly been too late; we needed to do things in parallel,” he said. “The jobs and opportunities we were hoping to create here in Hawaii will just be there (in South Korea) instead.”

Federal health officials have only authorized 28 COVID-19 rapid tests for emergency use, and Oceanit is still vying to join their ranks. Demand for cheap and user-friendly tests is expected to grow as schools, businesses and other public activities require a safe way to resume, even as more people get vaccinated.

Oceanit made news last fall with plans to manufacture a saliva-based COVID-19 testing kit in Hawaii. Since then, it has added a shallow nasal swab test to its lineup and plans to seek FDA approval for that one first.

“The FDA is more familiar with the nasal swabs in the rapid testing arena, so we thought that there was a good opportunity there for us to have a quicker turnaround,” Andrews said.

Both are currently undergoing clinical trials in Hawaii at The Queen’s Health Systems and Adventist Health Castle, and managed by outside agencies in Florida, Washington and California.

Andrews said local participation has been slow because Hawaii has had fewer COVID-19 patients in recent months.[Bold Mine]

Once it completes clinical testing, Oceanit will seek emergency use approval from the FDA. Sullivan expects the nasal swab test version, which is called ASSURE-100, to hit the market first, perhaps as soon as in two months. The plan is to price each test at less than $10.

Both use swab specimens to detect COVID-19 using a test cassette, the same way over-the-counter pregnancy tests are designed. The only difference is ASSURE-100 uses a shallow nasal swab and the other one, called ASSURE-19, uses a saliva swab. A positive test result could show up in 5 minutes, according to Andrews.

Rapid testing yields results in a matter of minutes, making it a preferred method for frequent testing at events such as sports competitions, conferences or school gatherings, which are becoming more common as the pandemic ebbs.

Also known as antigen tests, rapid tests pick up on coronavirus-specific molecules but their accuracy may depend on how far the illness has progressed.

Sullivan said he still wants to see Hawaii’s biotech industry grow to include not only research and development but manufacturing as well. To Sullivan, it would be an antidote to the islands’ economic woes caused by the pandemic and the state’s reliance on the tourism sector.

“With some training, there is no reason we cannot transform some of the lost visitor industry jobs into good paying biotech manufacturing jobs,” he said. “Although we may manufacture the current tests in South Korea, we have not given up on our commitment to create a more diverse economy in Hawaii, even if it’s one brick at a time.”

Sullivan is confident rapid testing will be an affordable tool as the pandemic evolves and new variants emerge.

“This is going to be around for a few years so we need to learn to live with it and manage it,” he said. “The world can’t be on hold forever.”