A massive amount of television, online and print media reporters have been MIA, or have they been abducted by aliens? Regardless, the public should be concerned. There are reports they’ve gone rogue and may be armed with propaganda and outright lies.

Kalakaua Avenue was a sea of smiles that stretched for several city blocks the evening of Aug. 28. Crowds with cameras gathered to capture the excitement and onlookers waved from balconies as a steady throng of freedom lovers from across the island, equipped with a colorful array of flags, banners and pithy slogans on their t-shirts, sang, danced and chanted, blew conches and caught a ton of shakas, thumbs ups and nonstop honking from passersby. For two hours the convoy converted the tourist atmosphere into a hoʻolauleʻa, spirits lifted in a joint call to replace mandates with choice, and to inform the world that Hawaii’s authorities are no longer committed to governing in a spirit of pono.

With such a widely announced and politically important scene of public interest unfolding, and one this eye-catching, the media should certainly have been clamoring. But there was not a single shrewd reporter in sight.

We Are the News, But Where is the Coverage?

Whatever virus is afflicting our local Media appears to be as contagious as COVID, a real global pandemic. Worldwide, cameras have not been clicking, video has not been rolling and reporters’ notepads remain blank. Yet millions of protestors, documented by personal cellphone, have been marching through the streets of France, England, Denmark, Germany, Australia, New Zealand, Italy and many other countries. In some cities, including in Australia and Germany, peaceful protestors have been beaten bloody, shot with water cannons, and doused in teargas. In others, like Italy, police have empathized with their fellow citizens and put down their badges on the spot to join the people in their plight.

Not since Vietnam have protestors congregated in such numbers and with such passion in America. Many more millions throughout the globe share our struggle. But the international media remains asleep on the job. Or in Hawaii’s case, busy being Josh Green’s lapdogs.

In Waikiki, a voice carried across the crowd, “Josh Green where are you? We have some questions for you.” This Green fellow can read a news prompt and adhere to his prepared notes, but we don’t care for his calculated press statements and COVID numbers, his messages of fear and paranoia. We want truth.

Rather than face critique or questions from his constituents, Green has taken to using compromised media channelsto smear us with falsehoods and accusations of threats, hate and racism. He takes a kernel of truth and embellishes it, which we’ve all known since kindergarten is synonymous with lying. Jewish scripture highlights morality and comes down heavily on those who willfully mislead others. The Hebrew term geneivat da’at refers to deceiving and cheating for personal gain. Such a person has an obligation to come clean.

The Media are Focused on Falsehoods, Rather than an Authentic Public Interest Event

We found the media, but they appear to be privatized by a government entity, particularly one who is given to discussing COVID ad nauseum and stifling voices who don’t agree with his authoritarian platform. Top news media has readily given Josh Green ample coverage, but when it comes to complaints about protestors, he has not been honest with the public:

In reality, we have been noisy, but positive and orderly. Participants outside Green’s condo have been escorted by police at every rally. If the things Green is claiming happen, HPD is our eyewitness, as are numerous videos of us. AFC sends out a bulletin each protest day with pointers about being lawful and having gratitude for HPD, about being respectful and peaceful, with reminders to smile. Included are notes about being unified in righteousness, encouragement about the wonderful absence of profanity in our rallies, and reminders that this is a celebration of our group as free-thinking individuals.

The scene is far from the frenzied mob that Green depicts. Search social media for videos of us, join us we march, or drive by and check us out. In every instance, you will see a controlled flow of people walking in slow and orderly fashion along the sidewalk and stopping occasionally. You will hear noise, but none of what Green describes. Amidst our symphony of pot-and-pan discontent, we chant for freedom or call inspirational or questioning messages on our megaphones..

The noise could have ended on day one if he had been willing to honor his word and speak with us. Is it lost on Green that he’s disturbing our families, and potentially our livelihood, our children’s schooling, our constitutional rights, and our freedom in making personal health choices for ourselves and our families? For two short hours we make our presence known, and he has the power to quiet the atmosphere, but not by whining to the papers or denouncing us as disease carriers for the public to loathe. There are thousands of us. Address our concerns.

“(The protestors are) condemning society to a lockdown and potentially large-scale death … but we have to keep people alive,” bleats Green in an Aug. 16 AP article.

The drama in Green’s rhetoric is astounding, the reasoning faulty, science out the window, and propaganda meter at full throttle. The irresponsibility of fomenting mass hysteria aside, it’s reprehensible to lay the burden of lockdowns, disease, and death on us. If your lockdowns helped, we would not be in this mess. And disease and death occur annually, whether or not a small percentage of the population questions your mandates. Why not give your full attention to the consistent leading causes of disease? Why offer band-aid solutions rather than encourage preventative health measures? Why censor pertinent information? That’s what tyrants do.

America’s leading causes of death have steadily been heart disease (which was double the number of COVID deaths last year), cancer and medical error. Yes, MEDICAL ERROR. Meanwhile, Americans ages 44 and younger succumb to car accidents, suicide and murder more than cancer or any other cause of death. This illiberal focus on COVID fatalities, when there’s a 99-percent survival rate, and the complete lack of similar panic over ongoing deaths from violent injuries and medical errors leaves much to be desired in the way of logic.

Green’s vaccine is no panacea. The efficacy and safety of the vaccine are questionable as per CDC’s VAERS data for the U.S. that shows more than 6,000 deaths from the vaccine and 600,000 injuries (more than any other vaccine combined in the history of vaccines). Those statistics are by scholarly accounts a fragment of the actual number. Green’s penchant for blaming the unvaccinated echoes the kind of discrimination that has led to social ills throughout history. As one sign succinctly stated at the Waikiki march, “Vaccine discrimination is the new racism.”

Contrary to what people were led to believe when they got vaccinated, they’ve been surprised to discover that the vaccinated still get sick, a headscratcher that will not be addressed at this time, nor will the fact that they still must social distance and wear a mask. Irrelevant to the unvaccinated, the vaccinated are suffering alarming infection rates according to CDC director Dr. Rochelle Walensky.

Hawaii healthcare whistleblower Abrien Aguirre has come out and described inconsistencies in the COVID narrative that he has experienced firsthand. When he says that he has seen more people die from the vaccine than from COVID, it’s time to analyze this problematic vaccine and Hawaii’s approach to treatment, rather than focusing an accusatory finger at Green’s critics.

Green is using smoke and mirrors to blame the unvaccinated for his health system’s shortcomings, but we refuse to be Green’s punching bags. The protestors, some of whom are vaccinated, will continue to stand united for the mutual cause of the freedom to choose.

Green’s race might be the one thing we like about him. The many religious people in our group welcome God conscious participants of all denominations. Again, there has been no racism at these rallies, and HPD can attest to that as eyewitnesses. If the protestors are so racist, why haven’t they ever yelled racist remarks? And how come the majority had no idea Green is Jewish? It’s because we have no interest in Green’s DNA. We care about his mandates.

Green claims we posted slurs about him around town. Let’s get real. The message in question is not printed but written in pen after the fact. Does hate speech written carefully, in small print, on the thin border of a poster of the person you’re defaming make sense? Would a hateful person take the time to neatly pen such a message, or would they take a sharpie and write “Jew” across the face of the paper, or a swastika for that matter? We’re not going to guess what a racist person would do because it’s a moot point.

Media agencies should never have gone along with Green pulling the race card when no racism has been exhibited by the protestors. We are against government overreach, and the only individuals who come under our radar are those who are not upholding their official duty to the people. 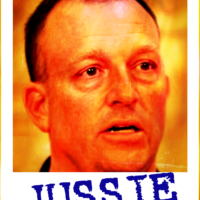 In one video, he’s in a restaurant and no one in his group is wearing a mask or distancing. In fact they’re standing close together, laughing and embracing. Green is a public figure and must therefore be held to greater standards than a common citizen, yet he is seen disregarding the very cautionary health measures that he expects of others.

In the second video, Green chooses not to respond to aforementioned whistleblower Abrien Aguirre whose video about shady medical practices in Hawaii COVID facilities went quickly viral. On camera, Aguirre asks Green to address his concerns. In the HNN article Green complains that he had a right not to speak to protestors on video after they were “threatening” him. There was no threat, and his hulking bodyguards make sure of it. Videoing him is not harassment, it’s the kind of scrutiny the media would normally engage in but has failed to do so.

Solutions: Where Do We Go from Here?

Our Lieutenant Governor can choose to atone for his geneivat da’at through honesty. Of course Green is disgruntled. He has not been transparent, and he doesn’t like being exposed. He fed untruths to reporters, and while avoiding us, blaming us and criticizing us, he claims he’s prepared to meet with us. Green says one thing but does another. Are these qualities of a trustworthy leader?

These are situations media should be addressing and calling out. Instead, once-trusty reporters are cozying up alongside the smooth-talking politician. Remember the good old days where investigative journalists challenged politicians and were relentless in their pursuit of truth? When politicians and media share an agenda, that’s a totalitarian dictatorship.

Our vibrant, goodhearted Waikiki crowd was comprised of Asians, Caucasians, Hawaiians, Jews, and every other ethnicity. There were kupuna and keiki. There were people from every corner of the island, representing every profession and a spectrum of socioeconomic backgrounds, but we all had one voice. E pluribus unum. Out of many, we are one. United, we can expose corruption, and hold media and politicians accountable.

What we want is simple: end the mandates. This descent into medical segregation is dangerous and must cease immediately. We must reclaim our inalienable rights, reclaim our freedom, our bodily autonomy, and our ability to choose, especially where there is risk.